Bangladesh government has finally shown it’s true colour about freedom of speech and attitude towards voices of dissent. almost two weeks ago Facebook and other social media was banned inside Bangladesh citing security concerns. Since then government seems to have changed it’s intentions.  See timeline below: 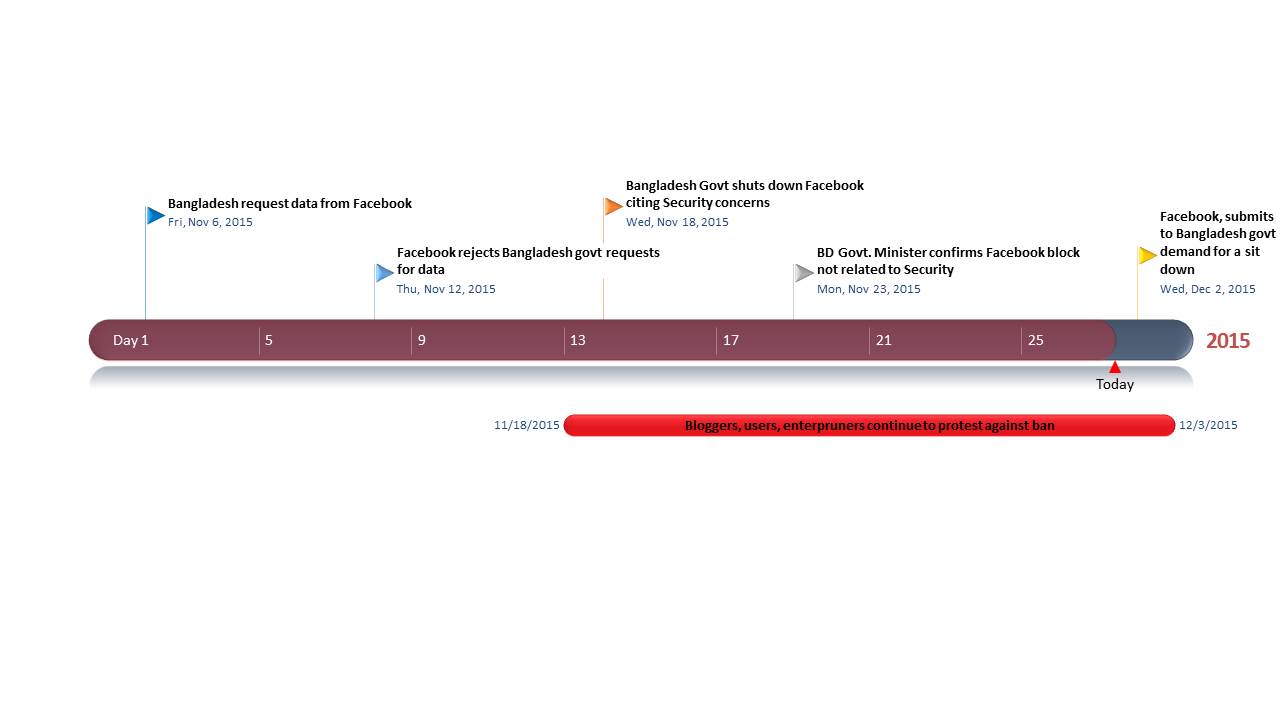 Despite the smokescreen created by Bangladesh Telecommunication ministry and two minsters, namely Mr. Palak and Mrs. Halim first citing security concerns relating to execution of two convicted war criminals, then few days later denying that the Facebook ban has nothing to do with War crime trials, followed by a cheeky open letter to public, filled with misinformation and deceit. All these time 28 million Facebook users of Bangladesh was confused by conflicting information from various sides.

Today we’ve learned that Facebook has finally gave in to Bangladesh government pressure and director for the region has agreed to have a sit down. it’s important to note that eCommerce is not yet fully flourished in Bangladesh. You can’t have a PayPal account from Bangladesh and most on-line retailers have reservation about on line payments infrastructure from within Bangladesh. Facebook is not expected to make a lot of money from advertisement revenue in Bangladesh. However, since all the local Blog platforms came under government intelligence monitoring, Facebook was the only place used by bloggers, activists to exchange ideas and run social awareness campaigns. Government always wanted to control voices, but Facebook was last remaining open space where Atheist bloggers could continue writing without fear of being taken down by force or intimidation. Although there are evidence of organised gangs of Islamists abusing FB safe space moderating loopholes, users were regularly supplied ID to FB to re-enable accounts after temporary shut-down.

Bangladesh has acquired a nasty reputation recently when a number of Atheist bloggers critical of political Islam were killed brutally by Islamist assault teams and Government took no steps. Despite tremendous international pressure, Bangladesh was seen constantly making efforts to save Islamism as a political tool and any voices of dissent were either threatened with legal measures were lack of state protection from Islamist killings.

Facebook cannot allow this space to be controlled by Bangladesh government. The ‘secular’ness of the state has long gone. Most democratic apparatus no longer functioning independently any more. Freedom of speech curbed by crushed by blasphemy laws and more laws are brewing.